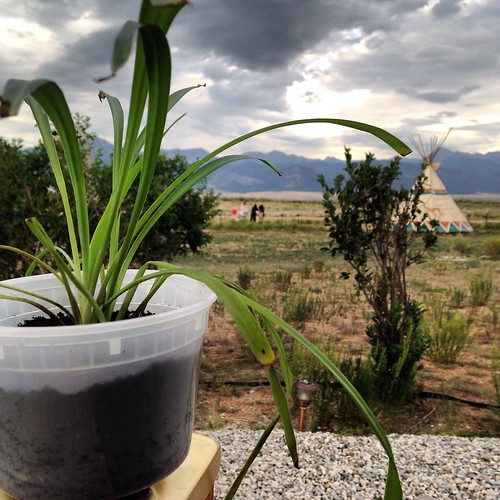 I’m typing in a yurt nestled in the San Luis valley in Colorado, hearing tiny drops of rain tap the canvas roof. I’m facing the Sangre de Cristo mountains, with my back to the San Juan mountains. At 8,000 feet of elevation, this high, flat valley seems like a place from another world.

We are driving a very long distance. We set out from California on July 10 and are planning on rolling into NYC on July 29, with many meanders along the way. Right now, I don’t live anywhere; I have no address, no job, no stuff other than a suitcase. In a few weeks, I’ll have a new home, a new job, and the boxes carrying my material life will show up in a large truck. For now, though, life is very simple; where are we driving today? Do we have enough ice in the cooler? Where should we stop for lunch? These small, simple decisions fill the days.

I woke up today with the word “liminal” echoing in my brain. I think it was triggered by this echoing valley, this in-between space. But I’m also in a liminal moment myself, as a new life opens ahead of me — soon, but not quite yet.

A month ago I said goodbye to my amazing friends at IDEO. It was not a simple decision to make. I’d been there for four years, and felt deeply connected to the work and the people. But I was feeling called, both by NYC, and also by the sense that after four years, it was time to graduate.

Over these transition weeks I’ve thought a lot about what it means to graduate. Last month I gave a talk as part of SF Design Week on habits for innovation — ways of seeing the world that allow you to see opportunities for creating new and useful products. But it was really about sharing the best advice that I’ve gotten over the past years, and the most profound shifts in thinking that I’ve experienced, mostly through my experience with IDEO. Essentially, it was the commencement speech for my own graduation.

Today I’m going to jump in the hot springs pool across the meadow, drink a little more tea, clamber up the Great Sand dunes, eat dinner in Santa Fe. Tomorrow we’re hopefully making it to Oklahoma. We’ll decide where to eat lunch, where to eat dinner, what little town to stop in for the night. Little choices, big choices.

The last vacation of the summer! We crossed the seas to attend a family wedding in beautiful Malta. I took a lot more photos the last time I was there. In this episode our travelers journey from NYC to coastal Maine. We drove up the coast and detoured slightly for lobster roll #2. Many subsequent lobster rolls followed. Then three days on Monhegan Island without electricity or cars. Oil lamps, painting, miles of hiking. Lots of haddock. A lecture on bats. Learning about lobstering. A TARDIS chicken coop. Then back home, with a stop in bucolic Harvard, MA. Breakfast and hiking and lunch with old friends. Then car, subway, plane, home to SF. (With a few days in NYC in there.)